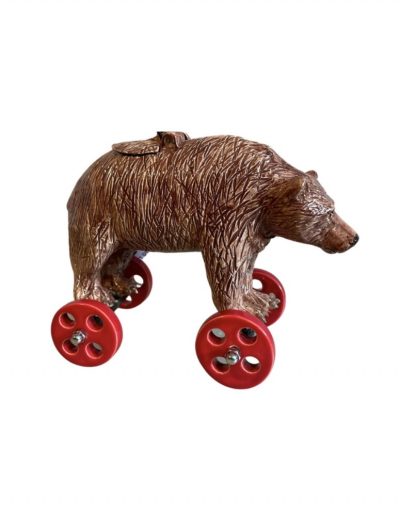 I am a clay sculptor using anthropomorphized animal forms to talk about the behaviors of people. Studying human behavior has always interested me. In the beginning, it was this interest in the animal forms that drove the process for me. Over time, human likes, dislikes, virtues and foibles all started to come out in my animal sculptures.

I was born in rural England, the West Country to be exact. Being close to nature and in a country where they love animals more than people, I quickly grew to love them too. Add to this the verdant greenness of southern England and plants became my second passion. I always had the urge to make things. This first manifested in the usual predictable areas of sewing and stitchery, then moved on to other media. The propensity to create has been with me always and has led me to learn ways to make things using a variety of materials. My early college advisors encouraged me to studio mixed media, but I really loved clay. Clay has been my life’s work and my constant companion since.

Textiles were a close second and that influence can be seen in the narrative pieces.

I moved back to Tucson, my adopted hometown after an extended sailing vacation on the coast of North Carolina, which lasted 14 years. I lived on the Pamlico Sound and sailed, swam and loved the nearness of the water. It was a fantastic privilege to sail every day. The thousands of ducks, pelicans, otters, deer and myriad other wildlife were right outside the window over my work table. It was an idyllic setting, until the water streamed across the studio floor when it rained. I enjoyed my time in North Carolina.

Come In To See All Our Wonderful Collections.

Drop Us A Message